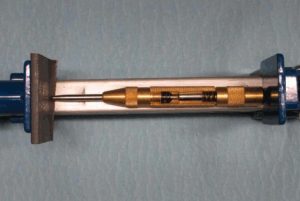 Ever tried drilling an accurate hole? It’s super hard, and trust me if you aren’t familiar with regular drilling, it’s never going to happen. The thing was hard until a magical tool called center punch came into limelight. And then finally, the era of automatic center punch enters.

This simple tool really makes drilling too easy without slipping screws. We’ll talk about how this automatic punch actually works. Let’s go for it!

How an Automatic Center Punch Works: What It Is & The Working Mechanism?

Once you become a pro in the business, you’ll tend to find drilling quite easy and manageable. However, the beginning phase will need you some added stuff that supports for complicating works. An automatic center punch is most probably going to live quite on top of that list.

Even professionals want to use this amazing tool because of the simplicity and time-saving elements it provides. Here’s everything you need to know.

What Exactly Is This Tool?

An automatic center punch is basically a fat looking pen-sized tool. It comes with a simple firing pin that helps to work the tool as a hammer. With applied force, this tool easily punches a hole in literally any surface.

When you deal with a drill, it can slip from the actual position because of high spinning pin. This becomes annoyingly dangerous to ruin your efforts. Then with a chisel, which is another instrument to work as a guide, a drill is capable to make a hole.

This chisel was actually the center punch that comes with a pointy end. It needs hammering for hole creation. Gradually mechanics came up with a better version, the automatic center punch. Everything was different from then and slipping screws or dangerous drilling was not a problem anymore.

To understand how an automatic center punch works, you need to go through its actual parts. So, majorly it comes with three segments or section on its body that on whole operates for making punches.

The three major moving parts are punch, intermediate rod or tumbler, and hammer.

Using a huge spring at punch’s back, a loaded part is called the hammer. There is a secure cap at the very end of this punch. It helps to adjust the force of punch. Usually, a user needs to adjust by tightening or loosening it up.

There is also a stopped hole in the hammer mass. This part is usually facing tumbler. Whenever there is a punch action, stopped hole will act as a taker for the rod. It is also known for being an anvil. The automation action provider part in automatic center punch is known as tumbler.

There needs to be slight cocking with this tumbler rod. Once cocked, the tumbler is skewed with existing position. The hammer mass faces its tip and touches gently. It needs to be in a slight offsetting way to hole.

There should be a bent end in tumbler spring. This helps to push and bear back the hammer mass against spring once punch is open. So, the hammer spring can store energy for punching.

You Can Use It For:

That’s it for today. I hope you have a better perception about automatic center punch now. You also have an idea why this needs to exist in your mechanical toolbox. You can’t imagine how many doors this one little tool can open.

Making tiny holes are actually a big part of many mechanical chores. You don’t want to mess with up with some poor drilling techniques.

So, getting an optimal quality automatic center punch will actually save you from a lot of disaster holes. Good Luck!

Hello! My name is Jeremy Bloomberg. I have been passionate about carpentry and DIY. Over the years, my passion slowly turned into expertise and wider knowledge about electronics. I’ve been involved in numerous projects, both professional and personal. I want to share all I have learned with you. Welcome!

RoyalMechanic is an Amazon Associate, I may earn from Qualifying Purchases